Mount Adams has lingered in the back of my mind for over a year. I attempted a winter ascent last year but was turned back by snow conditions. We returned this year with better gear and a determination to get to the summit and back safely. We accomplished our goal but the journey ended up being completely different from anything that we planned.

Mount Adams stands at 5,774 feet and is second in height only to Mount Washington in New Hampshire. This mountain is home to some of the most difficult terrain in the Whites as it is surrounded by several small peaks and the amazingly steep King’s Ravine. Also, unlike Washington, Adam has an undeveloped summit which makes it feel even more remote. I have had the pleasure of climbing this mountain in the fall and summer but have always dreamed of taking it on in the winter.

Our original plan was to start from Appalachia and head up the Airline trail, camp somewhere in the saddle between Madison and Adams and then make an Adams summit bid early the next morning. The weather reports changed all that. The Whites got hammered with a foot of snow the day before the hike and forecast called for -9 degrees and -50 wind-chill on the higher summits. We certainly believed this based on the extremely cold temperatures and high winds at the trail head.

At that point we thought weather conditions would keep us off the summit that weekend but we had come this far and still wanted to hike. Our objective then changed to just getting a good look at the King’s Ravine with some camping well below tree line. We geared up and headed onto the Airline Trail which had been packed down by a few hikers in front of us.

Snowshoes were definitely mandatory with over a foot of fresh snow on top of a 66 inch snowpack. Despite the cold temps we found ourselves warmed up and down to base layers in no time. Our pace was certainly slow but we did not feel that we were in a rush to be anywhere. From time to time a little wind would sneak through the trees to remind us of the frigid above tree line conditions. At one point the Airline trail branches off and commits you to an intense ridge climb with few outs. We chose to leave Airline for the Short Line trail which heads toward the King Ravine. The trail was unbroken but we didn’t think breaking trail would be a big deal considering the moderate elevation gain.

At this point one of our group members started feeling sick. He left us with his Snickers bars and headed back to the trailhead as winter camping is no place to be when sick. Now we were a group of three. We then decided to asses our situation on the map and we noticed that the Randolph Mountain Club’s Crag Camp was not too far away.

The Randolph Mountain Club operates several near tree line facilities like Crag Camp, Gray Knob Cabin, the Log Cabin and the Perch. These range from three sided shelters to heated cabins with bunk beds. On the map Crag Camp looked like a three sided shelter. We thought that would be a great place to camp because we could store gear and cook in the shelter. So we made Crag Camp our goal for the day. 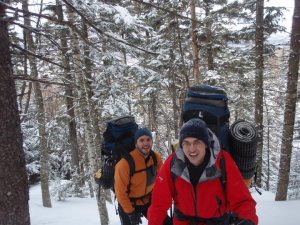 Crag Camp is situated near tree line on the edge of King’s Ravine which was significantly higher than our position at the time. We thought the Spur Trail was the best way to get there. The only challenge was that it relentlessly climbs 2,500 feet in 2 miles and was completely unbroken. I found myself kicking steps and utilizing trees as hand holds to make any progress on the ascent. We frequently switched off the lead to give everyone a chance to take a break from breaking trail in such steep conditions. After what felt like many miles (although it was less than 1 mile) Crag Camp was before us, only it was not what we expected.

What looked like a three sided shelter on the map was actually an RMC cabin complete with bunkrooms that sleep about 20 and an outhouse. Now it was not complete luxury as there is no heat, running water or power but it sure seemed more comfortable than a tent. We could barely contain our excitement as we dropped our icy gear and headed into our new home for the night. Crag Camp does cost $12 a night but we thought it was well worth it. 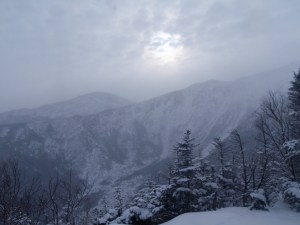 A few minutes after we settled in, other groups of hikers began arriving. Many of them were covered in snow and ice and generally surprised by the intense conditions above tree line. Almost everyone that we talked to had turned back from the summit that day. This left us in doubt as to what we could do the next day. We woke the next morning, packed our gear and decided that we would hike the .4 miles to Gray Knob Cabin, another RMC cabin, to check weather conditions and make a decision from there. To our surprise, summit conditions were mild with light wind and temps somewhere in the single digits. We chose to take Lowe’s Path from Gray Knob to the summit. 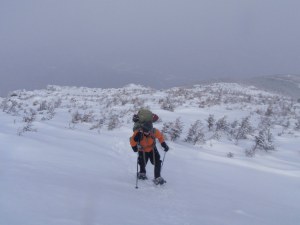 The trail seemed well packed but that stopped as soon as we got to tree line; this must have been where everyone turned back on the previous day. It is amazing at how much difference a day makes as conditions were good enough to keep climbing. Once above tree line we felt noticeably increased winds and decreased winds which justified adding a few layers, face masks, and goggles. We also put on crampons and took out ice axes to deal with the steep and icy climbing ahead.

Approaching the Adams summit in the winter is one of the most amazing experiences in the White Mountains. We were surrounded by heavy cloud cover which occasionally lifted to reveal the amazing views into King’s Ravine or one of Adam’s neighboring peaks. We could see the Adams summit well off in the distance and surrounded by its satellite peaks. We had all of this to ourselves as no other groups had made an attempt for the summit.

We reached the summit as heavy clouds closed in and shielded any views. As far as we could tell we were the first group to make the summit the weekend. We did not want to take the good weather for granted, considering we were a long way from tree line, so we quickly took a few pictures and headed for the Airline Trail. We managed to avoid any twisted ankles or serious injuries despite the abundance of rocks and ice on the way down.

Our route brought us around the top of King’s Ravine and down a very knife edge like descent on the way back to tree line. The way down was just as steep as the previous days climb so we endured several falls but were still able to keep a good pace. We got back to the cars at about 4:30 pm feeling very sore and tired. This hike was nothing like what we originally planned but everyone stood safe and we reached the summit so it was alright by me!