After a week of mild temperatures I thought that my recent hike up Mount Moosilauke would be accompanied by unusually warm temperatures. All weather reports only confirmed this belief. It ended up being the coldest, windiest hike that I have ever experienced. Thanks to good gear and a good crew it was also one of the best hikes of my life.

Mount Moosilauke stands at 4,802 feet and is the westernmost of NH’s 48 4000 footers. Its summit is a completely bald dome that provides what I think are some the best views in the whites. The mountain also offers a wide diversity of routes, with varying difficulty, and is very accessible from I-93. I am not alone in saying that Mount Moosilauke is one of the best in the Whites.

The original plan for this hike was to climb the mountain via the Gorge Brook Trail and then ski down the Carriage Road Trail to the Snapper Trail. So I packed the car with my hiking gear and ski gear and hit road for NH at about 4:30 am. I also somehow managed to set off my own car alarm as I left so I apologize to my neighbors for that! For some reason I still expected the mild conditions in MA to be present in the White Mountains. My car’s thermometer reminded me of how wrong I was as the temp dropped steadily as I headed north. Upon getting off the highway I noticed that many gas stations seemed to have lost power; possibly due to the high winds that were pushing my car around.

I arrived at the Moosilauke Ravine Lodge trailhead at about 8 am. In the summer this trailhead is near the actual Moosilauke Ravine Lodge. In the winter that trailhead is really just a small plowed section at the beginning of Ravine Lodge Road which adds 1.5 miles to each direction of the hike. I noticed single digit temps and very strong wind gusts, which almost blew my car door shut when I tried opening it, as I was gearing up and waiting for my fellow hikers. It then clicked that if it was this cold and windy at the trailhead, conditions on the summit might be pretty intense.

We quickly decided that a ski descent would be unwise due to the windy conditions, 10+ planned mileage and overall snow condition. I felt pretty thankful to leave my heavy ski gear in the car. Once our group finalized our plans, we donned snowshoes and began the 1.5 mile trek on the unplowed Ravine Lodge Road to the Gorge Brook trailhead. This was an interesting road to hike on because there was a packed part and a soft part which looked very similar. The only way to tell the difference was when we post holed. We were frequently hit with very strong wind gusts that only served as a reminder of what we expected to face higher on the mountain. A few breaks in the tress provided the first glimpse of the Moosilauke summit as we neared the Ravine Lodge. Thankfully it looked clear but we had no doubt that it was cold and windy.

After 1.5 miles we arrived at the Moosilauke Ravine Lodge. This is an impressive structure, maintained by Dartmouth College that sleeps up to 80 when it is open in the summer. It is also the hub for many trails including the Gorge Brook that we planned to climb that day. We began our ascent with gentle but sustained climbing up the Gorge Brook Trail. The trail was well packed which allowed for fast climbing. My snowshoes provided all the traction I needed and the trees provided a welcome break from the wind gusts.

I am always amazed at how much heat is generated while climbing. The temperature was hovering around 15 degrees at this point but I was down to just my base layer, a light hat and a thin pair of gloves. As we approached tree line we noticed a significant temperature drop along with sustained winds that brought the wind-chill to well below 0 degrees. We quickly stopped and began our pre tree line habit of “gearing up” with insulation layers, heavier hats/ gloves, wind shells, face masks and goggles. My hands felt completely frozen seconds after I stopped moving and I also had found that my light hat had frozen solid. I quickly found mittens and swung my hands around to create some blood flow. Once everyone was properly equipped we resumed our climb to the summit. 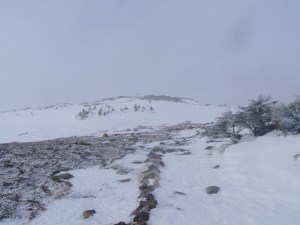 Visibility was good but the sustained 50+ mph winds made talking almost impossible. Without means of communication, we made sure to keep all group members in sight. The summit seemed steps away but the wind only increased as we got closer. We would normally stop at the summit for pictures and a snack. However in these conditions we didn’t even stop because we had to traverse a long stretch of exposed ridge to reach the protection of the Carriage Road trail for the descent. We proceeded in a cautious single file along the ridge and were hit by wind gusts that almost knocked us off our feet. I was very thankful for my trekking poles. 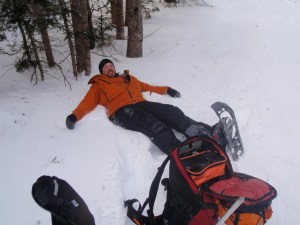 We were once again hit with cold wind blasts as we marched down the Ravine Lodge Road to the winter trailhead but this was nothing new to us at this point in the hike. We got back to the cars at about 4 pm with the temperatures at 10 degrees. 30 minutes later we were comfortably seated at the Woodstock Station & Brewery.