The loop ride from Hadley to the Montague Bookmill reaffirms everything I love about cycling.  It totals 35 flat miles that travel through the Franklin Country countryside on designated bikeways that lead directly to the Montague Bookmill for a perfect mid ride lunch break.
Hadley/ Sunderland
I started my ride at the Hadley Elementary School parking lot because that was as good a place as any From there I headed north on Route 47 towards Sunderland; following the Connecticut River on a hill free ride through farmland and the village of North Hadley. The roadside scenery personifies New England with distant rolling hills, tobacco barns and plenty of historic farm houses. You also pass several farm and ice cream stands if you are in the mood for a mid ride snack.  8 miles later Route 47 crosses Route 116 and the Franklin County Bikeway begins.
Franklin County Bikeway 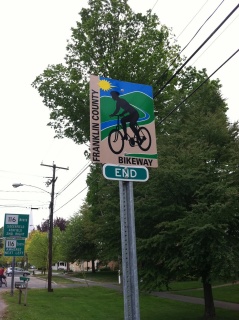 Genius, bliss, relaxing and inspiring are just a few of the words that come to mind when I think of the Franklin County Bikeway. It is a 44 mile paved loop of low traffic country roads through Greenfield, Deerfield, Montague and Gill with spurs reaching into Northfield, Sunderland and Leverrett. It was designed almost 20 years ago to enable transportation without cars.

However it didn’t take long for people to realize that the bikeway is also a great destination. It is possible to ride the whole route and see only a handful of cars. All you need to do is follow the bikeway signs and enjoy the ride as it takes you past waterfalls, scenic lookouts and working farms. I wish I could stay on bikeway forever but this ride only allowed me to spend about 12 miles on it.
The Montague Bookmill

The Montague Bookmill  is what you get when you combine a used bookstore, used record store, an antique store, a fancy restaurant and a café/ bar within a 1840s gristmill; it has to be seen to be believed. Your eyes will thank you if you do see it as It is situated just aft of Montague Center on the banks of the Saw Mill River which screams classic New England. It is also directly on the Franklin Country Bikeway which makes its Lady Killgrew Café a very popular cycling destination. I had a summer sausage sandwich, salad and a cookie while relaxing outside; life doesn’t get much better.
The Ride Home

Eventually it was time to return to the real world, but thankfully 15ish miles of pristine cycling stood between me and reality. I simply followed the Franklin County Bikeway signs to continue my ride on traffic free roads that eventually led me back to the intersection of 47 and 116. From there I just followed the same road I started on and was back at my starting point in no time. Along the way I must have seen 50 other cyclists riding everything from cruisers to triathlon bikes. It was a great day to be on a bike.

2 thoughts on “Cycling from Hadley to the Montague Boookmill”