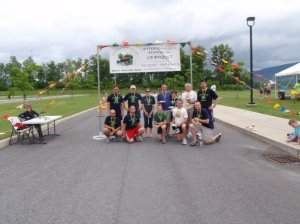 Does the idea of spending 29 hours in a van (with 5 other people) or running 3 times a day appeal to you? If so then you should consider running the 2010 Green Mountain Relay which is just over a month away. I did this for the first time in 2009 and it is easily the most fun I have had while running.

What makes it so fun? What is the Green Mountain Relay? My 2009 review should answer those questions for you:

The 2009 Green Relay was the most fun I have ever had while running. What made this event so special? Simply put, it took the normally solitary action of running and turned it into a team event; full of camaraderie, strategy, fun and of course running. This race will redefine your perception of how much fun 29 hours crammed in a minivan with 5 other people can be!

The Green Mountain Relay is a self supporting, 200 mile, 24+ hour relay race divided into 36 legs between Jeffersonville and Bennington VT. It mainly follows Route 100 which treats runners to 7 covered bridges, quaint country villages, and the lush countryside that Vermont is famous for. Most teams consist of 12 runners where each runner is responsible for 3 legs that range from 2.2 to 9 miles in length, with widely varying elevation gains. If you do the math, this format requires each runner to run during the day, in the dark and sometime early the next morning. One of the most memorable parts of this whole race is the 2 minivans each team is required to have. Most teams took the liberty of decorating these vehicles with blow up dolls, drawings or catchy phrases. In addition to serving as a billboard, the vans contain all the team’s food, water and sources of entertainment for the length of the race. They also whisk each runner to the beginning of each leg as their team travels down the course.

I discovered this race during a post marathon slump where I wondered what challenge can compare to running 26.2 miles; the fresh challenge and team component was all the convincing I needed. However, I had to think of dozens of other reasons ranging from legs with 1000+ feet of elevation gain to the robust food at the end, to convince my other 11 would be teammates to sign on. After a few months of reaching out to friends and friends of friends, I was able to pull together 11 other runners who were 23-50+ years old, of varying experience, from New York, Boston and everywhere in between. To top it off, most of the members had never even met each other. Team “Mo Money Mo problems” was formed.

On the morning of June 20, 2009 race day had arrived. Six months of preparation, several meetings and countless emails were all about to pay off. For a race with this much preparation the start is almost anti-climactic for a good reason. The race organizers do a staggered start (with the slowest teams starting first) so everyone finishes around the same time. Therefore instead of the adrenaline rush mass start you might be accustomed to; our first runner started the race along with two or three others, a mere fraction of the hundreds of other runners participating in the race, and the 200 mile trek began. As would be the drill for the next 36 legs; once our runner was off the remaining teammates piled into the van; checked the map and drove to the next checkpoint; making sure to provide some van horn encouragement when we saw our runner on the road. We would then eagerly wait at the next checkpoint, making sure the next runner was good to go and checking the clock to make sure our runner was on course. This is basically how a relay works.

Sometimes thing did not go as scheduled. For example when one of our runners was 20 minutes late to check in, we went looking for him only to find he had ran 2 miles off course up a mountain. We sure had a good laugh about that. Another time we had a miscommunication about meeting our other van at an exchange. We found ourselves pulling into the parking lot mere seconds before our runner arrived. These problems, when correctly solved, only add to the fun.

You might be wondering how this can be the best running experience of one’s life. The answer is that this event isn’t about seconds or coming in first; it is about having a good time with your friends and no one on the course seemed to forget that. This event turned my team of strangers in a close knit group that crossed the finish line together in 29:15:09.