The chairlifts stopped spinning at Mount Watatic almost 30 years ago but the mountain is still there. The trails are a little grown in and you now have to ascend the mountain on your own power but the reward for this could be one of the best ski days of your life.

Mount Watatic was a small ski area, off Bennett Road in Ashby MA that operated from the 1930s to the 1980s according to the New England Lost Ski Areas Project. It had a handful of trails and 550 feet of elevation that was shut down thanks to intense completion from bigger ski areas nearby. The mountain has been a backcountry ski destination since then. That is why we headed there the morning after a foot of fresh snow had fallen in a winter that has made central Mass one of the snowiest places in the country.

My trip was to Ashby was slowed by the snowy roads but I just reminded myself that it would be worth it to enjoy the snow on the slopes. The parking area is off Bennett Road in Ashby, MA; it appears to be the beginning of what used to be the road that led to the mountain. Make sure to get there early because the parking area can only hold a few cars.

Once I parked I tried to get my gear together as fast as possible which was working great until I tried to put my ski boots on. For some reason my feet can never seem to fit into my ski boots when I try to take them into the backcountry; I have had to walk down Mount Cardigan and Mount Washington because of this. Thankfully my friends helped me out and I got my boots on today.

We clipped in and began to skin up the old access road toward the summit. This route is well packed but it is not the most direct way to the top.

The wind-chill was below zero but the mountain protected us from the wind so it was surprisingly warm on the ascent. Eventually we reached the top, took the skins off our skis, locked our bindings and prepared to descend.

We picked a narrow chute and picked our way through a grown in trail. The powder was up to our waists, which made it challenging to maintain speed or to get up from a fall. It felt more like skiing in Utah than in central Mass.

It was hard not to imagine the skiers who enjoyed these slopes when the mountain was still open for 50 years. How many people learned to ski here or who called it their home mountain? Today there is barely a trace of that as the mountain is slowly reclaiming its slopes. We finished our first descent with a run through a narrow opening between pine trees that led to the old parking area. 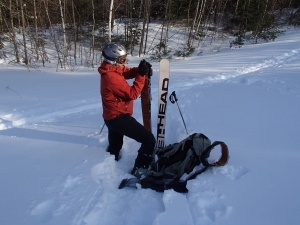 My quads were burning from skiing through so much powder but we put the skins back on and made one more ascent of the mountain. This time we took a much more direct route that had us back at the summit in minutes. I opened it up a little more this time and paid for it with several plunges into the powder. Before long I found myself at the bottom of the mountain and back at the car.

We ended up only getting 2 runs, with 1,588 feet of descent, which is a fraction of what we could have gotten at a lift served resort. However, the sense of adventure, fresh powder and the earned turns made it one of my favorite ski days of all time.