Landslide Gully is a multi pitch mountaineering climb on the side of Mt. Webster in Crawford Notch, NH. It is a great choice if you are looking for a challenge with a short approach but you should be prepared for a grueling exit if there is a lot of snow.

Landslide Gully has a very short approach from the parking lot across from the Wiley House.

You can literally see it right there in front of you from the parking lot.

We geared up, crossed the bridge and were on the climb in just a few minutes.

Thankfully there was an established boot path to lead us to it. This was refreshing since similar climbs, in places like Tuckerman’s, require a grueling 2.5-mile slog before the fun starts.

The climb began as a moderately steep snow climb. I imagine this could be a rocky climb if there isn’t a lot of snow but that was not a problem this time. This climb continued for a few hundred feet and it was mellow enough to do without crampons or ice axes. 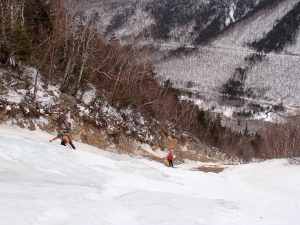 Eventfully we approached the first ice flow and it was time to break out the axes and crampons. The ice flow is low angle and can easily be climbed with proper gear and experience. On this day there was also a snow route that bypassed the ice. I chose the bypass, since I love snow climbing, while my friends roped up and took on the ice.

From here we were greeted with more steep snow climbing which led to the crux of the route; a much steeper and larger ice flow. 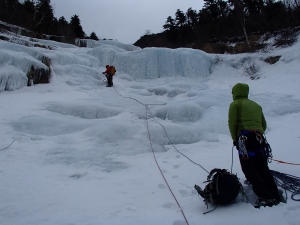 This can be climbed in one pitch or you can break it up into two. There is also a snow route, to the left and right, if you want to bypass the ice. 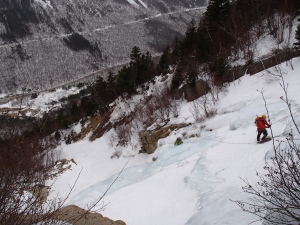 Once again I bypassed the ice on the snow while my friends ascended the ice.

After that it is a total snow climb that ascends several hundred feet. The pitch eventually increases as the width of the gully decreases substantially.

As we approached the top of the gully we did not see many good options to exit the climb. Our options were to down climb back to the car or to bushwhack our way up to the Appalachian Trail and walk out; we chose the latter. We exited the gully through an extremely narrow and steep chute that led us into an extremely thick and snowy forest. 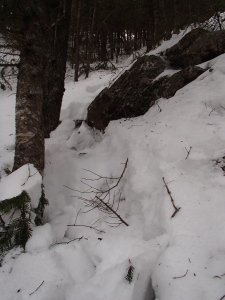 Every step became a battle against neck deep snow, snarly branches, rocks, pine trees and a very steep pitch. Each attempt to move forward usually resulted in sliding 3 steps backward. The branches grabbed and snagged on my pack; somehow they managed to unravel the rope, which dragged behind me until it got caught on a branch. Eventually we resorted to crawling and literally swimming in the snow to make our way to the Appalachian Trail. Landslide Gully might have a short approach but the exit is one of the most grueling that I have encountered. 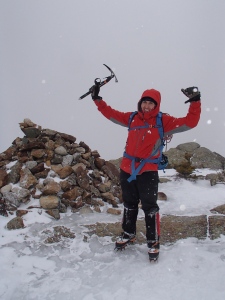 It felt great to step onto the boot pack of the trail. From there we had to slog a few miles down to the road and another .5 miles on the road to get back to the car.

Most of that climbing happens in the first 2 miles.

I am sure this climb can vary hugely based on conditions. So if you do this climb be aware of the conditions and prepare accordingly. We had 2 ropes, 2 ice axes each, ice screws and a full alpine rack.

We left the paring lot feeling exhausted but we got the adventure we came for.