Mount Monadnock, located in Jaffrey NH,  is one of the most climbed mountains on Earth but you can avoid the crowds by taking the Marlboro Trail to the summit. This route approaches the 3,165 ft summit on the west side of the mountain, away from the more popular trails, yet it creates the same short and steep experience that Monadnock is famous for.

The Marlboro trailhead is located outside of Monadnock State Park on Shaker Road in Marlboro, NH.  Shaker road, located off NH Rt. 124, is certainly the road less traveled as it is gravel and strewn with potholes and rocks. The Marlboro Trail is short and steep like most of the more popular routes to the peak. It climbs just under 2,000 feet in just over 2 miles.  Someone in reasonable shape should be able to complete the ascent in 2 hours.

We started our hike on a cloudy late December morning with temperatures in the 30s. There was no snow on the ground but the slight chill in the air reminded us that winter is coming. The Marlboro trail starts with a gentle climb bordered by stone walls in a classic New England forest which was a great way to warm up for the climbing that lay before us. I was surprised at how well the trail was marked with carins and white marks from the very start. 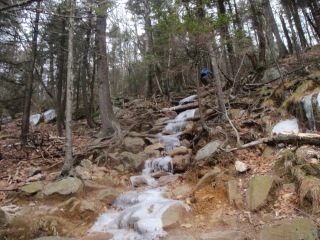 After .8 miles the trail’s personality drastically changes and the climbing begins with a steep and icy pitch. At this point the ice could be easily avoided since it was mostly in the center of the trail.

The climb quickly becomes steeper on mostly exposed rock slabs. This allowed for a true alpine experience with more than enough ice to justify Microspikes. 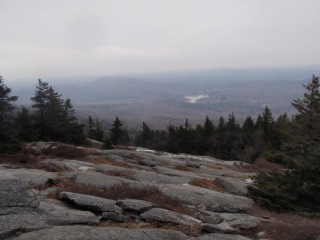 We were rewarded for this climb with expansive and exposed views into the valley below. On a clear day I imagine this view could be even more breathtaking.

The icy rock slab climbing continued for about a mile as we found ourselves approaching Monadnock’s summit. 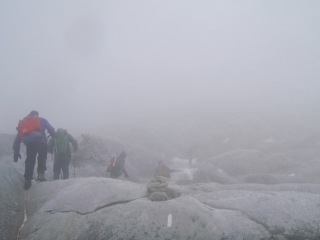 Visibility and temperatures dropped near the summit while wind increased and ice was everywhere which is typical for a NH summit this time of year. We added a few layers that made it much easier to deal with the conditions. 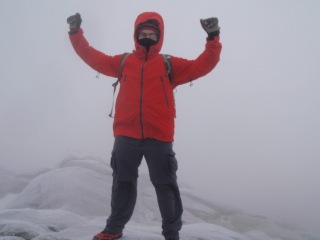 We found quickly found ourselves at the summit which was encased in clouds that denied any sort of a view.  With these conditions Monadnock felt much higher than its true elevation.  We spent a few minutes on the summit to have a snack and to put on ice traction.

The sky began to clear as we left the summit which gave us a hint of the grand views that were possible from here. 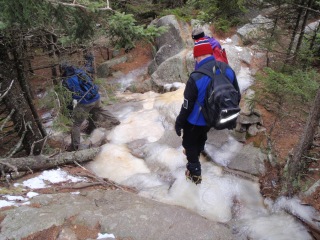 We descended cautiously due to the steep and icy conditions.  The wind died and the temperatures felt much warmer once we left the summit so we were in no rush.

The view from the rock slabs remained stunning as we descend toward flatter terrain.
We quickly found ourselves back on the stone wall lined trail in the forest which meant the trailhead was almost within reach. We only encountered about 6 other hikers during the trip, which is very small considering the popularity of Monadnock. I highly recommend trying the Marlboro Trail If you seek a less crowded, but still beautiful, route to the Monadnock summit
Please visit this link for more details on the Marlboro Trail.

6 thoughts on “Mount Monadnock Trip Report: Via the Marlboro Trail”