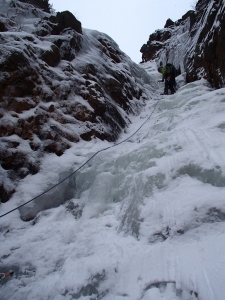 Ice, snow, rocks, steep pitches and just about anything else you could want from an alpine experience can be found on Shoestring Gully. This multi-pitch ice and snow climb was the perfect way to expand my climbing comfort zone to kick off the winter season.

Shoestring Gully is a mixed ice and snow route on Mount Webster that starts as a steep rock scramble until you hit the technical stuff where 4ish pitches of climbing await. It is a great introduction to climbing because the technical stuff is not too crazy and each section is separated by sections of snow climbing.

We parked on RT 302, just past the Wiley House with Shoestring Gully staring at us from across the street. It looked just like a line of snow from the parking lot but I knew things would get more interesting once we got closer. This was my first time climbing the gully but 2 members of my group climbed it last season and 2 others were experienced ice climbers. We packed 3 ropes along with several ice screws, slings and carabineers for our team of 5. Each of us also had a harness, two ice tools, crampons and everything else you would bring on a winter hike. 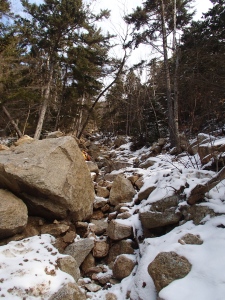 We started our adventure on the Webster Cliff Trail but soon broke off it to head toward the gully. The climb starts as a steep and sustained ascent up a narrow clearing in the woods. The climbing quickly got rockier and steeper.

I took a look over my shoulder and saw that we were rapidly gaining elevation.

The boulders got bigger and the climbing got steeper.

All of a sudden we found ourselves facing a wall of ice that was flanked on two sides by towering rock walls; things were about to get interesting. The first pitch of the gully was a 10ft-ish ice bulge. We roped up then set up a belay and the first person in our group began the climb. He set protection on his way up and established an anchor at the top to belay everyone else.

We conquered the first pitch and proceeded up a gentle snow climb to the next technical section. 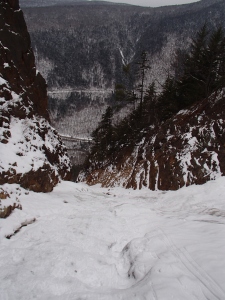 A look back reminded me of how far we had come and how far a fall would be so I chose my footing carefully.

At the next technical pitch we roped up again and began the process of setting protection and anchors to help everyone ascend safely.

We repeated this process a few times until we reached the final pitch of the day.

At this point snow was falling and it was starting to get dark but the fastest way out was to go up so we put on headlamps and kept going.

We safely reached the top of the gully as darkness set it in but it was a warm night and nothing but a gentle hike stood between us and the car. It is normally not a good idea to still be climbing in the dark and it was our fault for getting a late start.

We followed established boot tracks that led us to the Webster Cliff Trail. We walked down in the dark with our headlamps reflecting off the falling snowflakes.

Shoestring Gully, if done with the right gear and experienced people, can be a great introduction to technical climbing. I can’t wait to do it again.

One thought on “An ascent of Shoestring Gully”