My friends and I recently decided to kick off the winter hiking season with a trip to Mount Washington. The weather forecast looked gloomy and we had no idea what to expect so we packed enough gear to be ready for everything from vertical ice to hanging out at camp all day. Thankfully the weather gods granted us two warm bluebird days that allowed us to safely climb Tuckerman’s Ravine to start the season in epic fashion.

I questioned my judgment just a little as I was driving north in a light rain; if conditions were bad now wouldn’t they be a million times worse on the mountain? The weather forecast was still questionable and I was starting to think we were in for a rough weekend.

We pulled into the Pinkham Notch parking lot to find cloudy skies, no rain and unusually warm temperatures; things were looking up. We were still a little bummed to see the forecast that called for record warm temperatures and considerable avalanche danger. This forecast still made it unclear what we would be able to climb so we packed up our gear and headed up the Tuckerman Ravine Trail for the Hermit Lake Shelters which would be our home for the night. We figured that we could decide our next move once we set up camp. 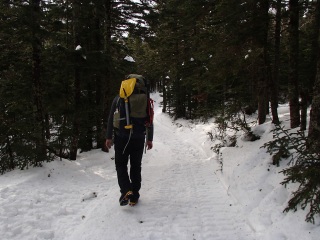 The 2.4 mile hike from Pinkham Notch to Hermit Lake is a real slog with a continuously slightly steep climb that is mostly deprived of dramatic views until Tuckerman’s is within sight.

But the ends justify the means on this hike since we knew that we would soon be playing in one of the best alpine playgrounds in the northeast.

The Hermit Lake Shelters contains 8 lean-tos, 3 tent platforms and a caretaker’s cabin. It sits in the shadows of Tuckerman’s Ravine and is the basecamp for multiday adventures on Mount Washington. It can accommodate 86 people and is typically full every weekend night. Amazingly we were the only ones staying there this night. 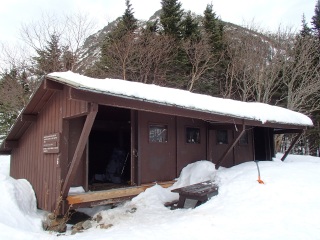 We arrived at the Hermit Lake Shelters to find plenty of skiers milling around but all of the shelters were still empty. 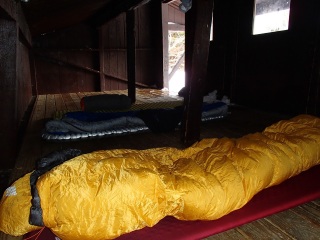 The three of us set up camp inside a 4 sided shelter designed for 20 people; this was luxury camping at its finest. We didn’t take much time to enjoy our spacious accommodations because the weather was rapidly clearing up, we still had a few hours of daylight and we wanted to climb something in the ravine. We made sure to bring shovels, avalanche probes and other safety gear because Tuckerman’s can be a dangerous place.

We quickly checked in with the caretaker to confirm avalanche conditions and then headed to play in Tuckerman’s Ravine. The ravine towers over the Hermit Lake Shelters but it still takes about 20 minutes of uphill hiking to get into the bowl.

Along the way we had expansive views of the White Mountains behind us and the breathtaking ravine in front of us. A surprising number of people were still skiing and sledding in the ravine when we got there at around 2 pm. 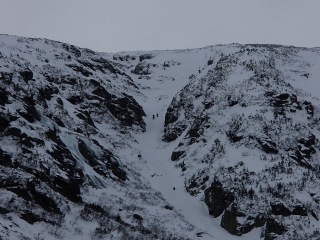 We even saw a climbing team ascending the Left Gully.

Our plan was to climb part the Sluice route to examine snow conditions and possible routes for climbing the next day. This average pitch on this route is 40 degrees so we put on helmets and readied ice axes. It quickly felt like we were climbing a wall of snow.

Each step required us to kick boot steps into the snow and plunge our ice axes into the slope. It was a lot of fun but still dangerous so we moved with caution. We made it about halfway up the route when decided to use the rest of the daylight to head back to camp.

We climbed down the same route we just ascended. It was steep enough that we had to go down by facing into the slope and essentially reversing the process we used to climb. This was new to me so I definitely took my time on the descent.

Eventually the slope leveled out and we were able to do some glissading. We found ourselves back at our shelter just a few minutes later with the sun starting to set.

We made a hearty dinner and went to sleep just as the sun went down. Yeah this was an early bedtime but our plan for the next day was to get an early start to climb Left Gully and descend via Boot Spur. 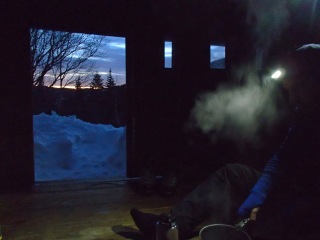 We woke up at 6 am and my friends ate a hot breakfast. I had forgotten a container of any sort which meant my only breakfast option was pop tarts but that was fine with me.

After that we quickly stowed non-essential gear and headed for the Ravine.

Amazingly we were the first people to step into the ravine that day. Having a place like this to yourself is a rare thing.

Left Gully is one of the easier routes up Tuckerman’s Ravine but easy is a relative term here. The max pitch is still between 45-55 degrees and the route comes with all of the risks that make Tuckerman’s Ravine such a dangerous place.

Our intent was to climb as a team so we put on our helmets, harnesses and ropes before the route got to steep. This might not be necessary but we still thought it was good practice.

We climbed in a zig zag pattern up the route. This made the pitch seem more reasonable and it lessened the chance that we would collide with one of our teammates during a fall. The wet snow and the steep pitch reminded me a lot of being on Mount Rainier. 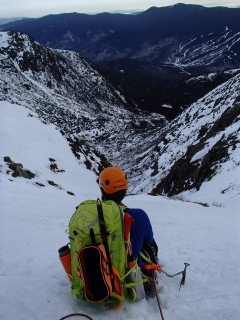 Once we got into a rhythm the ascent seemed to fly by but we made sure to stop a few times just to take it all in. This was truly living the dream. 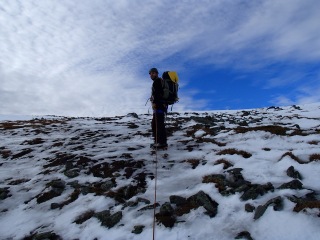 We soon reached the final steep pitch that took us over the headwall. 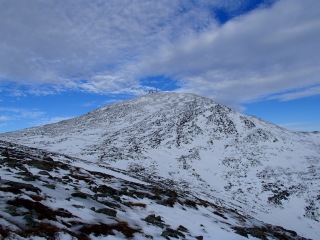 From here we could clearly see the Mount Washington summit and everything else for miles around. The temperature was 47 degrees and there was almost no wind. These were summer conditions in the middle of January. It felt almost wrong to stand at the top of Tuckerman’s Ravine in winter with no need for gloves or a hat.

We put away the ropes and began the trek around the top of the ravine to the Boot Spur Trail which would bring us back to the Hermit Lake Shelters. The clear skies combined with low cloud cover in the valley made for dramatic scenery everywhere we looked. 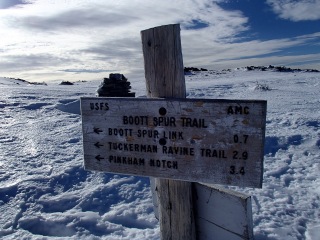 This was one of those hikes that I wished would never end but we quickly found ourselves at the Boot Spur junction. This is a great descending route because it is not nearly as steep as anything in the ravine.

We had plenty of glissading opportunities which had us back to Hermit Lake in no time. Once there we packed up our gear and trekked the 2.4 miles back to Pinkham Notch.

This will hopefully be the first of many hikes this winter. The weather conditions, the climb and the camaraderie of my fellow climbers all added up to create one of the most memorable winter hikes that I have ever done.

One thought on “A Tuckerman’s Ravine Ascent Via Left Gully”