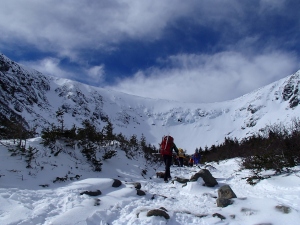 Tuckerman Ravine is an imposing bow shaped feature that sits on the southeast face of Mount Washington. In the summer the Tuckerman’s Ravine Trail takes hikers directly up the head-wall on their way to the summit of Mount Washington. In the winter/ spring there are no less than 10 routes, with 40-90 degree pitches that delight climbers and skiers.

Our plan for this trip was to climb a route in Tuckerman Ravine that had low avalanche danger. We didn’t care about summiting Mount Washington because the journey really was the destination on this trip. Tuckerman’s Ravine has all the dangers of a big mountain such as avalanches, variable weather and the threat of deadly falls. Therefore we packed iced, snow and avalanche gear to be as prepared as possible.

The trip from Pinkham Notch to Hermit Lake (the base of the ravine) is a 2.4 hike with 1,800 feet of climbing. This part of the hike hike is a grueling slog because the trail is groomed, it is as wide as a road, it is view less and it is a sustained climb. We moved as fast as possible, just to get this part of the hike over, and were at the Hermit Lake shelters in about an hour and fifteen minutes.

We stopped for a quick snack at Hermit Lake where we ran into Kel, from Adventure Spirit Rock + Ice and Alpine Experiences. We spent a weekend with him where we learned the ropes of mountaineering in Huntington Ravine a few years ago. 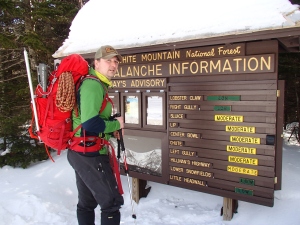 The weather was clear, temperatures were brisk and the wind in the bowl was silent so we checked the avalanche board and headed for the ravine. Our plan was to climb Right Gully or the Sluice since both were snow climbs with low avalanche danger. Our descent plan was to either down climb the route or go down the Lion’s Head Trail.

The hike from Hermit Lake into the ravine goes by fast because the view gets better with every step as you get closer to the alpine awesomeness that is Tuckerman Ravine.

It was finally time to commit to a route. We knew avalanche danger was minimal and Right Gully had a boot track going up it so we chose Right Gully.This is where I should note that there are no route markers in the ravine and based off everything we saw we believe our route was Right Gully; if you think different then let me know. 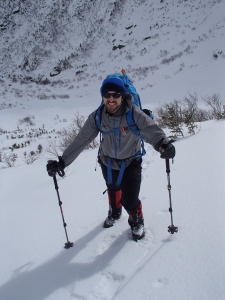 The climb starts as a steep snow ramp that we climbed with trekking poles without our crampons on. 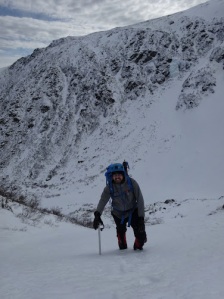 Eventually the pitch gets steeper and the run out, from a fall, looked dangerous. This was when we put on crampons and readied ice axes. We chose not to rope up and to not set protection. 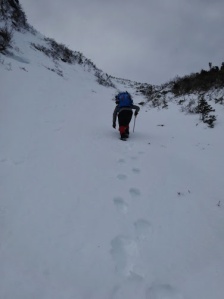 We kicked steps and planted our ice axes with each step; a fall would have taken us all the way to the bottom of the ravine and we did not want that. Thankfully the snow-pack was deep enough for us to get solid footing.

Eventually the steepness increased and the boot pack disappeared. We took turns breaking trail in waist deep snow because it was exhausting work. The pitch nears 50 degrees near the top which made me slightly nervous but we climbed through it with solid foot and ice axe placement. 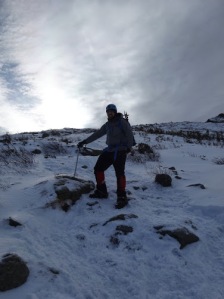 As we neared the top of the ravine we could see the Lion’s Head Trail, with a group of at least 20 hikers, yards away. We thought that was a preferable descent over down climbing the route we just climbed. 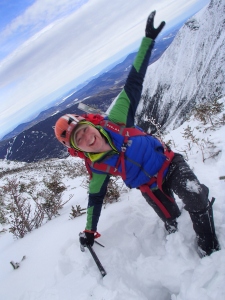 The snow between us and the trail was chest deep at times, so we had to literally swim in the snow or crawl on all fours to disperse our weight but we made it to the boot packed trail in a few minutes.

We could see the summit of Mount Washington but had no desire to reach it so we turned and descended via Lion’s Head. 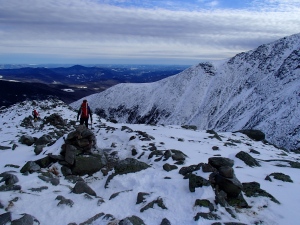 The views from here are unreal.

Descending Lion’s Head is technically easier than the ravines but it is no joke. There were several steep pitches and one where someone even fixed a rope.

We made it back to the Tuckerman Ravine Trail. Talking about the amazing climb we had just done was a great way to pass the time and we soon found ourselves back at the car.