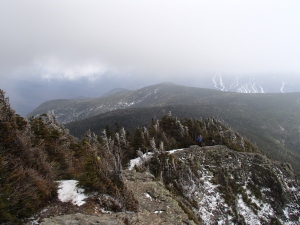 Almost a year had passed since I reached the summit of a 4,000 foot peak in the White Mountains. All of my recent climbs had been focused on technical ascents of ravines and gullies instead of mountains but it was time to reach the top again. We recently did a loop hike of Mount Flume and Liberty that finished the winter season in epic fashion with a front row view of spring’s emergence.

We chose Liberty and Flume because they have some of the best hiking that the Whites have to offer. Our plan was to take the Liberty Springs Trail to the Flume Slide Trail. The slide would steeply take us to the Franconia Ridge Trail where we would summit Flume then Liberty. Finally we would take the Liberty Springs Trail back to the parking lot. This all adds up to a 9.8 mile loop with around 3,700 feet of elevation gain.

We did not know what kind of conditions to expect as we pulled into the trail head. Temperatures were in the 40s at the parking lot with no snow in sight but this can be deceiving when it is the middle of April in the White Mountains. We knew we could encounter snow, mud, ice, dirt, wind and rain which made it challenging to choose footwear. Mountaineering boots and crampons would be ideal when we encountered steep and icy pitches but they would be painful on bare ground. Leather hiking boots and microspikes would be great for traversing miles of muddy trails but the lack of front points would make steep ice difficult. Two of us went with mountaineering boots and crampons while two of us chose leather hiking boots with microspikes. 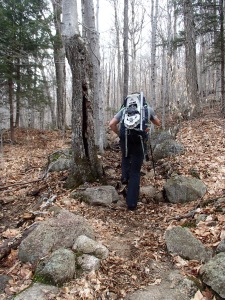 This hike starts out flat and uneventful. However it was interesting to see the changing of the seasons from winter to spring.

Hard packed snow clung to much of the trail and some sections of the forest were snow covered but mud and dirt were almost everywhere. 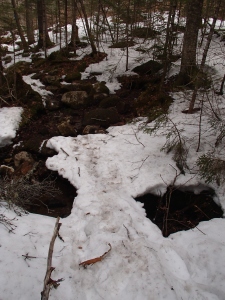 The snow bridges at stream crossings were getting awfully thin.

Eventually the landscape and temperatures felt a lot like winter as we began to climb to the base of the Flume Slide.

The Flume Slide Trail is an extremely steep trail that climbs to the Franconia Ridge Trail and it looks a lot like a rock wall in the summer. It was coated in ice and snow on this trip. 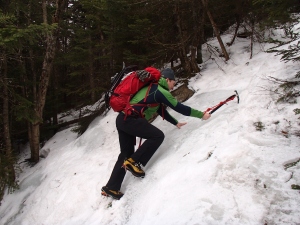 The two people in our group with mountaineering boots and crampons were about to have a lot of fun.  They sunk their front points in as they took on several short ice bulges. 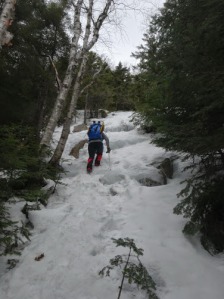 My friend and I, who just had microspikes, had to carefully pick our footing as we climbed around the most treacherous sections. 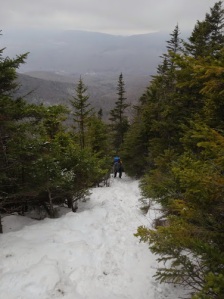 The slide is the payoff for a trip that had been uneventful until this point. The pitches were about as exciting as it gets without needing a rope and we were finally seeing the first views behind us. I would not recommend descending this route in any season; especially if conditions are wet. We worked our way up the slide until we emerged on the Franconia Ridge Trail just .1 miles from the summit of Mount Flume. 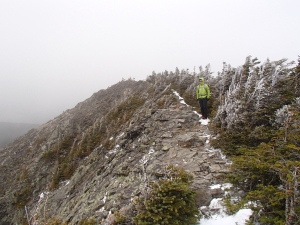 Temperatures had dipped into the 30s, a light snow was falling and wind was thrashing clouds as we began the above tree line approach to the summit. The conditions here were a lot different from the ones at the parking lot.

We reached the summit of Mount Flume as it was encased in clouds. There was no view but it still felt great to be standing at the top of a 4,000 foot peak. 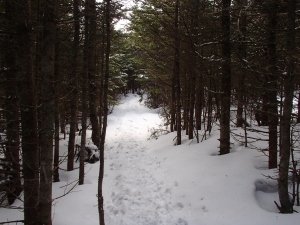 We could see the clouds briefly parting as we began our traverse to Mount Liberty. We dipped back into the trees and hiked what felt like a short distance with a moderate amount of elevation gain; it felt great to be hiking above tree line again.

We emerged onto the summit of Mount Liberty to find thick cloud cover with occasional views. This is one of the most impressive summits in the Whites in any condition.

We had a snack, took in our surroundings and then began the descent back to the Liberty Springs Trail and the parking lot. 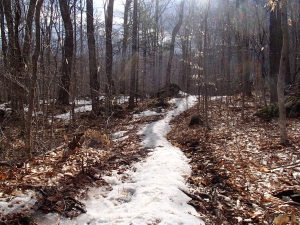 Soon the only snow we saw was the “monorail” that clung to the trail.

We reached the parking lot feeling slightly tired after all those miles. If you are looking for a hike in the Whites, and you are comfortable with the conditions, then Mount Liberty and Flume is one of the best choices!