The 7 Sisters Trail Race is changing. The 2014 edition of the race included chip timing 5 starting heats, an updated website and a Facebook page. These are pretty drastic changes for an event that has had a crowded single track mass start kicked off by the bullhorn welding Race Director for the past 20 years. However the course itself, friendly volunteers and the fun loving attitude of the runners are what make this race special and those things have not changed.

The 7 Sisters Trail Race is a 12 mile single track out and back race that climbs 3,700 feet along a course that is generously lined with mud, sharp rocks, slippery roots and almost every other obstacle that exists in nature.

The course has almost no flat terrain which means runners are either climbing or descending the entire time. This is not an exaggeration. My watch tracks when I am climbing, descending or on flat terrain and it told me that I was on flat terrain for only 46 seconds during the entire race! Just to put all of this in perspective; it takes the average runner over 3 hours to finish and the course record is 1:42. This is pretty slow for a 12 mile race right?

The toughness of the course has been getting this race into the national spotlight. Runner’s World name it the hardest up/ down race in the United States and it has been added to the La Sportiva Mountain Cup series. This is a pretty big deal for an event that started as a fun run with 98 runners in 1991. I started running it in 2000  and have watched it steadily grow ever since. This year over 500 runners registered which is more than double the number who signed up in 2011. I guess people like a challenge and word is getting out that the 7 Sisters is the most challenging thing there is.

This year I arrived at the starting area several hours early to beat the crowds, warm up and chat with fellow runners. It is easy for strangers to become friends at this race; everyone was trying to find out who was running it for the first time and who had done it before. I have to admit it took me a few seconds to take in the chip timing system and designated starting heat areas but I knew it was for the best since a mass start with 500 people would have been miserable. The race director began herding the hordes of runners toward the start line about 15 minutes before start time. 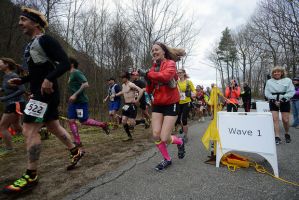 photo by Greg Saulmon; The Republican

Heat 1 went first followed by the next 4 heats at 1 minute intervals. This was supposed to help reduce the congestion on the start of the course as it climbs Barre Mountain and it worked. There was still a bunch of people on the trail but we were all moving; that is saying a lot for a course that climbs hundreds of feet in the first .6 miles.

After the first climb the course begins a seemingly endless series of sharp descents and climbs for six miles until the turnaround. Some runners took this half easy, to save energy for the second half, and others turned on the gas. I think that the only way to survive this race is with a strategy since it can be overwhelming if you think about the entire 12 mile course at once. Instead I chose to focus on one hill, one energy gel and one minute at a time. Somehow this made the challenge seem more reasonable.

This year there was a group of enthusiastic supporters with a drum waiting at the top of he gnarliest climb to encourage runners. There were also a few people chanting cheers. I thought this only added to the fun. My girlfriend was waiting on top of Mount Holyoke, the last climb before the descent into the turnaround, to offer some encouragement. This gave me the inspiration to push through the 1.6 miles to the turnaround. I saw the leaders heading back towards the finish as I began the descent off Mount Holyoke. This is the point in the race where a single track trail becomes a two way street.

The 7 Sisters turnaround is the only comforting thing you will find on the course. It is run by cheerful volunteers who are handing out Gatorade, water, bananas, gels, bars and much needed words of encouragement! My parents and grandfather were waiting here to cheer me on which certainly brought a smile to my face!

The second half of the race is when the challenge really starts. This is where you need to turnaround and run back up the mountain you just came down as you retrace your steps all the way to the finish line. There is no room for doubt or second guessing yourself here. Thankfully I was feeling great this year so I thanked my parents for their support and charged back up the hill. The next 6 miles felt like they went by really fast since it was so much fun to chat with other runners and to just be outside. I crossed the finish line 15 minutes faster than last year with a huge smile on my face; there is nothing like the 7 Sisters Trail Race.

Words don’t really do this event justice; it needs to be run to be believed. If you want a race that will test your physical and mental limits then the 7 Sisters Trail Race is for you and hopefully I will see you there in 2015!