Horseshoe Gully is easy to overlook. It is one many gullies on Mount Webster, it isn’t the most challenging climb, it has a frustrating exit via a sustained bushwhack and it sits right next to the always popular Shoestring Gully. However, Horseshoe Gully is a great way to experience the thrill of mountaineering in complete solitude.

Horseshoe Gully is Shoestring’s northern neighbor right off Rt. 302 across from the Willey House in Hart’s Location, NH. It is easy to spot from the parking lot; spoiler alert it looks kind of like a horseshoe. The climb consists of a bushwhack approach with three WI 1-2 ice bulges separated by moderate but semi exposed snow climbing; note these conditions are subject to change based on weather.We  previously had taken on Shoestring and Landslide gullies and were very excited to see what Horseshoe Gully had to offer.

From the Willey House we crossed the Saco River then took a right on the Saco-Willey trail. We headed left on the Saco-River Trail and headed left .2 miles later on a line towards the gully. There was no boot pack to guide us but the gully was obvious through the trees.

there is a gully in here somewhere

From there it was an easy, but surprisingly long, bushwhack through well-spaced trees until we were on the gully.

We could have hit it a few yards sooner but it looks like we didn’t miss much.

We broke out crampons and ice axes and began the snow climb upwards. There is always something thrilling about climbing gullies as the road gets smaller and the pitch gets steeper. We were literally one mile from the car but it felt like we were in a separate universe. 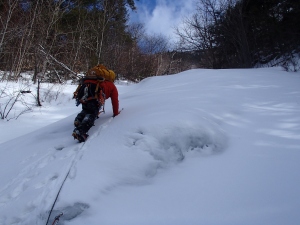 We encountered the first ice bulge, which was peaking out from under the snow. We chose to rope up and go straight up it; we brought all our gear so why not use it and be as safe as possible? 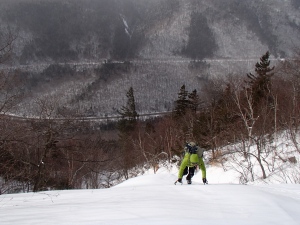 The 15 degree temperatures got to me during this climb and it was nice to get feeling back into my hands are we chugged up the short snow climb to the next ice bulge. This one is a little longer and steeper then the first but there was an easy bypass around it and I chose to do that. 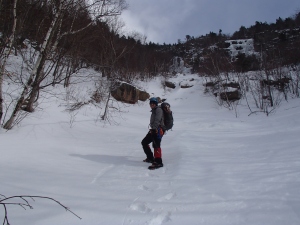 From there it is another snow climb towards some imposing cliffs where the gully curves to the left which reveals the crux of the climb. 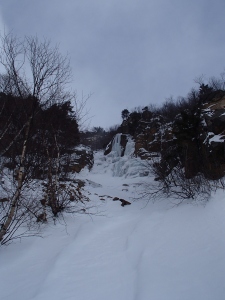 This is a short ice flow that looks a lot like Shoestring Gully.

it doesn’t get more fun than this!

We setup a belay and ascended as efficiently as possible.

heading for the woods

With the ice bulges behind us we faced a short snow climb into the woods.

now we are bushwhacking

Downed trees, spruce traps, branches and rocks all worked together to make almost make this the most challenging part of the climb. 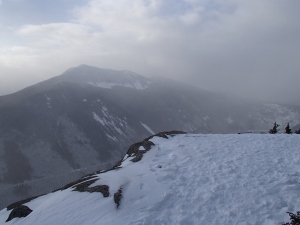 who doesn’t love a good view?

We kept pushing, uttering a curse word from time to time, until we finally hit the Webster Cliff Trail, which gave us the best view of the day. From there we followed the trail back to the Saco River Trail and back to the car for a 5.58 mile round trip with 2,600 feet of elevation gain.

If you attempt this climb then you should have some mountaineering experience and appropriate ice/ snow gear. Pay attention to conditions and plan accordingly.